In early March of 2195/1 T.G.E., Brun encountered a band of adventurers at the Red Butterfly Casino in Hellas Park, capital of the Mars Confederacy. He played poker with Jim Delaney and the following people:

When five Canid (“Uplifted” canine) bandits tried to rob the casino, Brun helped fight them off, throwing tables and bravely facing down laser rifles. He later asked Orion Starchaser for help getting offworld and away from ongoing conflicts involving indentured wrestlers and the Synth Liberation Front.

Sometime later, while in the Asteroid Belt, Lt.Cmdr. Kevin Reese recruited the Ursoid for his homeworld security task force. Brun agreed, and served aboard the Blackbird as it was reassigned from traveling with the Dauntless to accompany the Pina Colada in May 2195/1 T.G.E.

In August 2195 A.D./C.E. (or 1 T.G.E.), Brun accepted a promotion to the rank of Lieutenant Commander in the Union of Solar Nations space navy in reward for his participation in missions for a homeworld security task force. 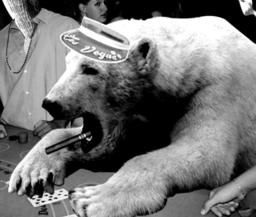