Skills (should be 40 points total):

Ship function: Doctor, in charge of the medical/science bay aboard the Gryphon

Born in 2167 to a Brahmin family in Mumbai, India, Srinu Pahul was genetically enhanced for heightened intelligence. His wealthy parents obtained for him the best education available, including advanced degrees at Peking University, Stanford University, and the Sarbonne.

Dr. Pahul was tenured at the Northwestern School of Medicine, but he ran into troubles with his genetic research toward the goal of immortality. He also encountered difficulties with Black Box Security Co. and befriended test subject Chris McKee.

Like Star Trek ‘s Khan Noonien Singh or Deep Space Nine ’s Julian Bashir, Srinu believes that some people are in fact better than others or can be improved. Like Stargate SG1 ’s Daniel Jackson, Srinu feels some responsibility and patriotism in Earth’s defense.

Among Srinu’s hobbies is archaeology, and he has taken an active interest in evidence of extraterrestrial interaction with humanity thousands of years before the recent open and official First Contact. He believes the early Harappan civilization of the Indus Valley (and the “Vanished Lands”) confirms more outlandish theories about the origins of human mysticism and metahuman abilities. 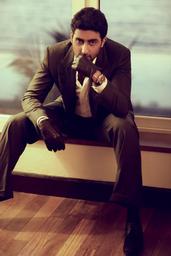