Species: Saranen (see below)
Homeworld: Seranus/Tokera 4, about 35 parsecs from Sol

Weapons (bonuses are to hit, damage):

Ship roles: Marine aboard the refitted Blackbird and Pina Colada

Species:
Seranus is a lush earthlike planet, the fourth of seven orbiting Tokara, a red dwarf about 35 parsecs rimward from the Sol system in the Milky Way Galaxy’s Orion Arm. The humanoid Seranens evolved from organisms that resemble both Terran plants and animals. They share an empathic link with many life forms on their world.

Seranens appear to be well-muscled, hairless bipeds with humanlike faces and pale blue or white skin. They’re just over two meters tall and live up to about 200 Terran years. They are gentle and graceful, but can move quickly when necessary. A philosophical species, the Seranens took several thousand years to gradually develop a technological civilization capable of interstellar travel (only a few centuries ago). They have colonized a few neighboring systems and have joined the Kharvamid Alliance.

Background:
Enkidu Aristheon was selected at an early age by the Survey Bureau because he demonstrated an aptitude for diplomacy with aliens. His family was exiled to atone for the deeds of his older brother, who killed someone’s “soul partner” in self-defense. The Justicar was assigned to roam the universe to enforce Seranus law, even beyond their worlds.

Enkidu began wandering the galaxy beyond Seranus space in search of his “third soul,” which he couldn’t find on his homeworld. Enkidu’s companion is Glaucon, a sphinx-like creature with wings and multiple keen eyes. As part of the atonement process, Enkidu wants to help other people find peace with themselves and nature. 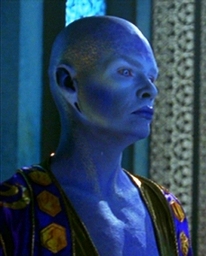