The best damn space pirate in the galaxy

Human male from the Asteroid Belt. Looks like that —>

Eugene Plaf was born to Wilfred and Martha Plaf in the colony of New Kansas. Beauford, a.k.a. Wilfred, is a successful supplier to miners in the Asteroid Belt. After pirates raided his home, Plaf renamed himself “Jax” and left to seek his own fortune as “the best damn space pirate” in the Sol system.

Jax developed a reputation as an excellent pilot of the Slipstream and eventually met the crew of the Gryphon, a mix of spies and explorers. Jax has been trying to avoid wealthy suitor Cassandra and her friend Bonnie Kawagura.

Jax’s cabin on the Gryphon, if one ever steals a glimpse inside, is never locked. If one were to look inside, they would see bare walls and furniture, the bed would be military neat and looking like it’s never been slept in. There is nothing in there in terms of personal effects. It is a rather sad-looking place, and doesn’t seem to make much sense in terms of Jax’s extremely colourful personality. 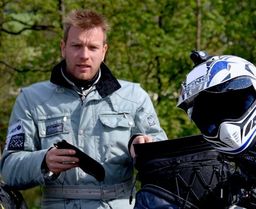