“Namid”
Language: The Pomuyan people have a single thick strand for a vocal cord. They project their voices in a series of low tones and vibrations that are both required for communication in the Pomuyan language.

Outward Apperance:
Thin blue fur covering their skin. Longer hair extending from their collar bone up their necks over the sides of their face and the top of their head. Slightly different color then their “body fur.” Human shaped hands without finger nails. Standard human facial structure. Thicker torso and arms then a normal human. Five equal-sized webbed toes, thick leathery skin on the bottom of their feet. No visible reproductive organs. Broad flat teeth. Solid blue eyes. 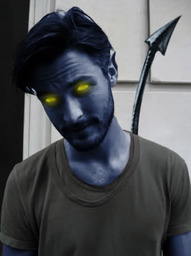