Background: Born in the Mars Confederacy, Sebastian Growlick is a member of a rare line of “Synths.” Unlike most leonine Felinoids (bioengineered or “Uplifted” humanoids), the Growlicks were carefully selected for potential traits as commanders on long-range space missions. They tend not to suffer the low intelligence, short lifespans, or atavistic rage of many other genetically modified Terran species.

In addition, Sebastian’s immediate predecessors served in United Earth Authority military actions against various rebels on Mars and in the Jovian Commonwealth. Unlike many of his peers, Sebastian views the Synth Liberation Front as terrorists rather than freedom fighters.

Sebastian served the Union of Solar Nations space navy with distinction, earning a commission as acting captain of the Morifaiwet/Blackbird, an experimental biomechanical Olvar scout ship that was part of Lt.Cmdr. Kevin Reese’s task force. He is eager to explore interstellar space and has managed to work well with the aliens in his crew, despite a slight superiority complex toward other Terrans…. 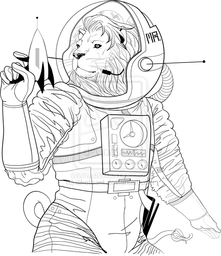