Tariq Asrad Saladin was born in the Near East at an unspecified date. He entered a monastery and eventually learned of his metahuman abilities. He then wandered the world [see also Gene D.’s D20 Etherscope: “Gaslight Grimoire” steampunk scenarios].

Shortly before open and official First Contact between Terrans and interstellar societies, Tariq left the Sol system and traveled with the Ma’ari (diminutive pale humanoid wanderers; created by Jenna R.P.) aboard their Talari (ark ship) the Cyan Horizon. It was with them that he encountered the explorers aboard the Blackbird. He joined them after an apparent REM drive malfunction and eventually returned to Earth via the Precursor gate near Oasis Station.

Tariq is still seeking enlightenment, and he recognizes the opportunities posed by traveling the galaxy, as well as the threat posed to humanity by the approaching Zarkonian Armada…. 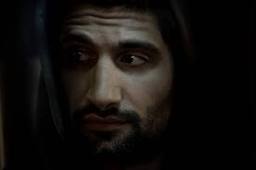