Status (based on hull size):

In the year after open and official First Contact between Terrans (mostly humans) and extrasolar species, the United Earth Authority began working with the Kharvamid Alliance. One major focus of interstellar trade was technology, specifically propulsion and military defenses.

After the crews of the Blackbird, Appomattox, and Pina Colada reported on the threat posed by the approaching Zarkonian Armada in spring of 2195 A.D./C.E. (or 1 Terran Galactic Era), the renamed Union of Solar Nations intensified its efforts. Some of the first warships to be produced at the Utopia Planitia shipyards in the Mars Confederacy and in the Asteroid Belt combined Transit faster-than-light capability with robust armor and weapons.

The Dauntless was assigned to patrol the vast area between the outer colonies of the Sol system and the nearest inhabitable star/planetary systems. It was also tasked with law enforcement against smuggling under the auspices of the Interplanetary Patrol, as well as homeworld security for the U.S.N. Navy. In addition, it carried out exploration missions, along with the Blackbird and other members of its task force.

In May 2195, acting command was transferred by Col. Shan Gray to Cmdr. Helena Cain so that “Lt.Cmdr. Kevin Reese” [Bruce K.] could take the Blackbird and conduct longer-range missions with the yacht the Pina Colada [telecom team 5c]. 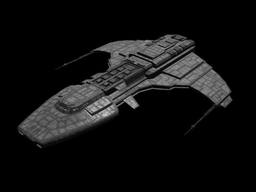