In the late 22nd century, humans still wear clothing for fashion and function. Resource scarcity, environmental and population pressures, and technological advances have led to some changes, but the styles at the time of official First Contact with galactic societies are still recognizable to denizens of the early 21st century.

Daily wear
Most of the billions of people on Earth need to get around their home megalopoli efficiently. Long coats with filtration units built into their collars protect wearers from acid rain, smog, and ultraviolet rays. Hats with wide brims and dress gloves have made a bit of a comeback, and fabrics such as neowool and neocotton are lighter and wear longer than in the past.

Beneath outerwear that resembles that of the 1940s (think Blade Runner ) is a bewildering array of styles, from the skintight garb of Oceania and the undersea cities to the loose robes of much of Africa and the Middle East. Neckties, stiletto shoes, and eyeglasses curiously persist, but they now come with data ports, adjustable heels, and virtual/augmented reality interfaces.

Buttons, zippers, Velcro, and other fasteners also remain, although they are more for appearance, since self-closing seams exist. There has been another revival in “traditional” costuming, including kilts, saris, and kimonos. The average person still dresses for comfort, with typical layers of underwear, a shirt and pants, and shoes or boots.

For telecommunications, people have biometric identification cards or strips built into the sleeves of their outerwear — they can relay health, legal, and financial status to readers as required. Privacy is less valued than in the 20th century. Comm(unications) links range in size from a ring with a holographic interface and a videophone to a bracer covering the entire forearm with a micromainframe and scanners.

Men & women
Men still tend to wear tailored suits or kimonos, and women still wear clothing that accentuates curves. Both show somewhat less skin at work than at play, but colors and styles vary widely, especially with the use of holoviz projectors and “chameleon-weave” smart fabrics.

For most people, a stylish outfit is still preferable to showing too much, even if people tend to be more fit than in past centuries. Scarves, skirts, jewelry, lingerie, and other accessories are still used by both sexes in part to attract mates.

Social status
A manual laborer toiling in a megacorp compufarm in what was once a shopping mall in North America will likely have drab coveralls, while a celebrity executive in an orbital city will no doubt dress in a flashier style. Athletic wear and youth culture still heavily influence fashion, but so do designers looking back at centuries of history. In general, hair is kept shorter (or absent) in more formal settings but longer in casual ones.

Most criminals will try to avoid being conspicuous, with the exception of crime lords flaunting their wealth. “Synths” need less clothing, but they may dye their fur or shave patterns into it. Most androids and “near-humans” try to blend in with the mass of humanity, but a few flaunt their inhuman features, whether it’s extra limbs, augmented organs, or cybernetic “chrome.”

Offworld
The necessities of protection mean that most people in orbital habitats or the colonies of Venus, Mars, etc. must be prepared for vacuum at any moment. Thus, their outer garments are designed to close up airtight, and hoods with full rebreathers are common. Those who must spend much time on the surface or in space will wear suits granting varying degrees of mobility, radiation protection, and style. Terrans tend to have more color; colonists tend to prefer conformity.

Some aliens, notably the Olvar, have been aware of humanity for some time and copy Terran fashions well before humans can be influenced by galactic societies. Swashbuckling fashions such as capes, high boots, and vests become popular with traders.

Military uniforms
At the time of " Vortex ," the armies of regional governments (i.e. the North Eastern American Megalopolis) still follow the traditions of their nation-state predecessors. Megacorps (Vimeco) and planetary authorities (the Venusian Finance Collective) prize efficiency, while the United Earth Authority/Union of Solar Nations and the United Ecumenical Movement try to project their legitimacy.

Most uniforms include life-support and communications gear, as well as rank ID, unit insignias, and distinctive color schemes. At the time of First Contact, in 2194 A.D./C.E. or 0 Terran Galactic Era, the U.A.E.’s uniform is a simple light-blue coverall with black neoleather boots and a silver helmet, similar to that of its United Nations predecessor. They have lots of pockets and a red stripe down the sleeves and arms. ID patches are built into the epaulets, and comm bracers with microcomputers are standard-issue. 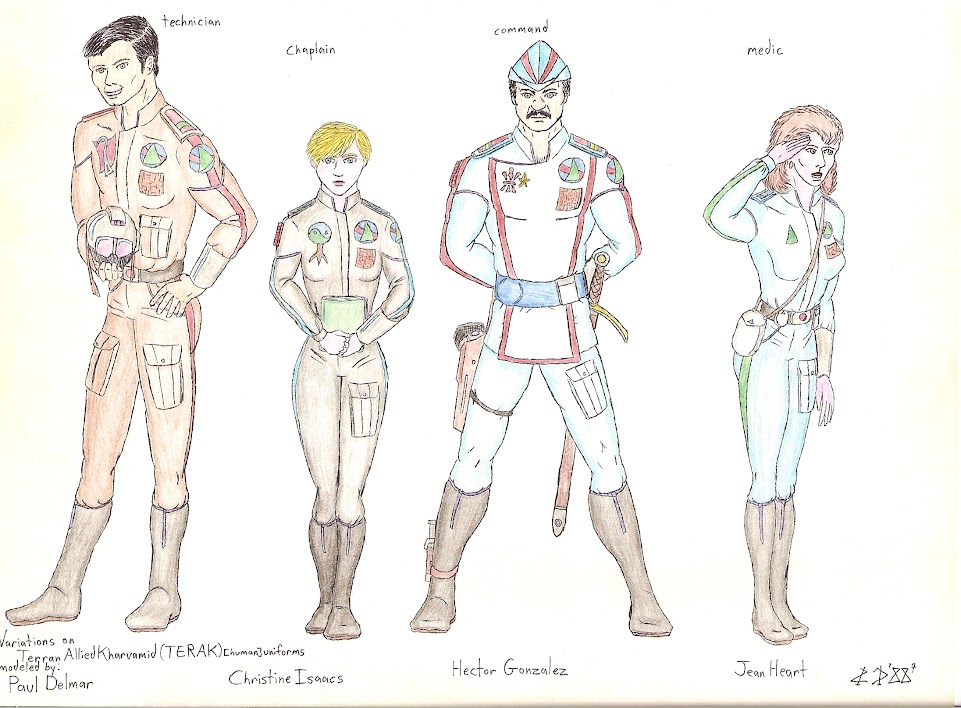 Early variants include dark blue for the North American Aerospace Marine Corps, green for the People’s Army, red for the Red Star aid organization, and black and white for U.E.M. chaplains. They resemble the science fiction costumes of Stargate SG1 .

Shortly thereafter, the U.S.N. and U.E.M. adopt more tailored dark blue and black uniforms with brightly colored stripes denoting division. Shoulder pads/epaulets and collars carry rank, ID, and unit/homeworld insignia, and they become more elaborate in dress uniforms. Sidearms include pistols and swords as the TerAK joins the Kharvamid Alliance. Officer’s uniforms are double-breasted, similar to those in Babylon 5, Andromeda, or Battlestar Galactica. 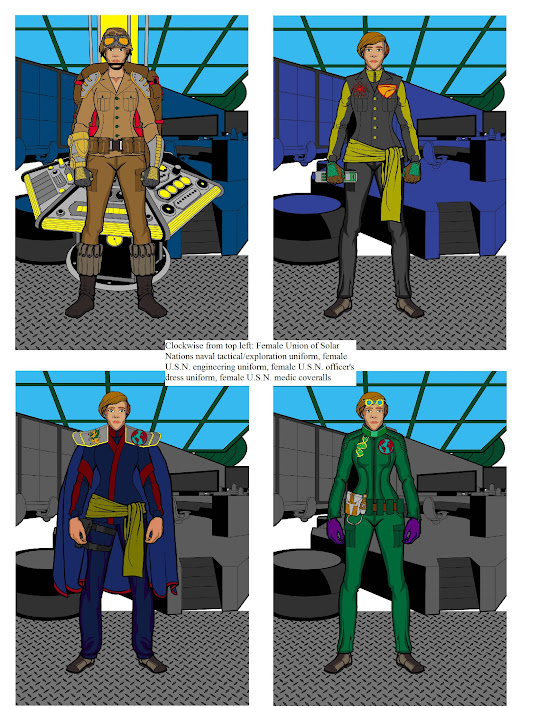 As humanity begins exploring interstellar space, looser, camouflage-ready variants evolve. Even some (but not all) private exploration and trade ships follow suit in their duty gear. These superficially resemble the science fiction costumes of Robotech and Star Trek .