Background: Aughest-vor was born to a wealthy family in the Lemuria orbital city (at one of Earth’s LaGrange points). He was a typical dissipated dilletante, involved in numerous sex scandals. By contrast, Aughest’s cousin Raine appeared responsible, or at least ruthless in service of megacorporation Vimeco.

Aughest-vor is an excellent solar-sail racer, participating in several regattas in the Sol system and beyond. While serving as the pilot of a transport near the Rio de Janeiro “beanstalk,” he became involved with a group of extraterrestrials and their Terran allies. They eventually became the crew of the Morifaiwet/Blackbird, an experimental biomechanical scout ship from the Olvar Star League.

Among other things, this adventuring party helped Aughest-vor find his calling as an interplanetary executive and to finally discredit Raine as an ally of the xenophobic Terra Prime.

After many adventures across the Sol system and exploration of several planets on the way to Oasis Station, an interstellar crossroads, Aughest-vor returned to Earth. He hopes to help unite humanity after open and official First Contact with extrasolar societies, earn profits from the Tyche mining operation, and prepare for the threat posed by the approaching Zarkonian Armada…. 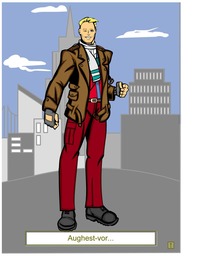