Background: Kevin Reese was born to a middle-class family in the North Eastern American Megalopolis (NEAM) in the Boston-Atlanta metroplex. He eagerly entered the academy for the Interplanetary Patrol of the then-United Earth Authority [think U.S. marshals in the Old West).

Kevin served at the Namor-Asperagen colony, where he met a young woman, Heather. They were married shortly thereafter, but she was then murdered in an apparent burglary. During the investigation, the idealistic police officer was disenchanted when he found clues implicating his superior, Nick Cheney.

Embittered Reese was transferred to the Mars Confederacy during a round of civil unrest. There, he met Chris McKee, who was then with the North American Aerospace Marine Corps, and Hector Chavez, then an intelligence analyst.

Still hoping to make a positive difference, Lt. Reese eventually returned to Earth. There, he met a group of aliens and their Terran allies, and they would eventually become the crew of the experimental Olvar scout ship, the Morifaiwet/Blackbird. Along the way, Kevin made new friends, explored many strange worlds, and defended U.E.A. interests from xenophobes in Terra Prime, Black Box Security Co., and some Ru’ulok-influenced factions.

He also learned that Cheney was now living with his sister-in-law Jennifer in New Shanghai on Mars. Kevin tried to get her to leave the abusive relationship, but was initially unsuccessful. This affected his self-confidence for months, until events around distant Oasis Station renewed his thirst for adventure and patriotism in defense against the approaching Zarkonian Armada.

Upon his next return to Earth with the Blackbird, Kevin accepted a promotion and took command of a Union of Solar Nations task force charged with homeworld security. He leads a few long-range ships aboard the Dauntless and is working on strengthening the Sol system’s defenses….

Officers of the Dauntless: 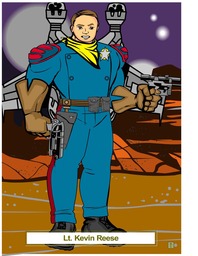