Weapons (bonuses are to attack and damage):

Ship roles: Marine, security vs. boarding parties on the Blackbird

Space marines in “Vortex:” Each continent and regional state of Earth in “Vortex” participates in the military of the Union of Solar Nations (U.S.N.; formerly the United Earth Authority). The North American Aerospace Marine Corps (see Aliens, Space: Above and Beyond, and Starship Troopers) is Denver’s contribution. It follows the traditions of the U.K. Royal Marines and the U.S. Marine Corps and is a branch devoted to “boundary movement” between sea, land, air, and space. Capital ships in the Terran space navy usually have a contingent of marines for boarding and landing actions.

Space marines are highly trained, motivated, and equipped but are often looked down by members of the other military branches as dumb, suicidal “jarheads.” There’s of course some truth to the stereotype, but like U.S. Navy Seals, Army Rangers, or other special forces, marines go ahead of regular troops devoted to holding, not taking, territory.

Many personnel in the relatively small U.S.N. Army are of East Asian and Martian descent, while U.S.N. naval officers tend to be from Latin America and the Asteroid Belt. Air Force pilots are drawn from Europe, Oceania (including undersea colonies), the Lunar Free State, and the L-5 orbital cities. The Venusian Finance Union contributes materiel and logistics.

Interplanetary Patrol officers (think U.S. Marshals in the Old West) are drawn from across Earth’s teeming megalopoli and the scattered colonies of the outer Sol system. Because of relatively recent tensions with the Mars Confederacy and Jovian Commonwealth, those two entities are less well-represented in the U.S.N. armed forces.

At the time of open and official First Contact between the Sol system and interstellar societies, the U.S.N. military has been quietly preparing. Once trade is opened with the Ru’ulok trade guilds and Olvar Star League, the Aerospace Marines are among the first to benefit from advances in propulsion, weapons, and other technologies. Noteworthy bases include Fort Olympus Mons on Mars, shipyards in the Asteroid Belt, Camp Alpha near Alpha Centauri, and Base 12 at Wolf 359.

After the crews of the Blackbird, Appomattox, and Gryphon warn authorities about the threat posed by the Zurmiz Krott/Harbingers of the Righteous Order of Submission (and their cannibalistic madness-inducing nanites), the Marine Corps prepares for combat against the biomechanical probes of the approaching Zarkonian Armada…. 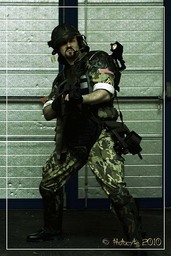