Aspects (3, based on hull size)

Status (based on hull size):

Inspired by/similar to: Hammerhead fighters, from Space: Above and Beyond

Service history: The Raptor -class aerospace fighter , with its distinctive forward swept wings , had been a success for the North American States’ Aerospace Marine Corps and the United Earth Authority on Earth, the Mars Confederacy, and in patrolling the outer colonies from 2170 to 2185. By the time of official First Contact with extraterrestrials, the U.E.A. began improving its fleet. The Raptor II, launched in 2194/1 T.G.E., features better maneuvering, weapons, and sensors than its predecessors, making it the front-line fighter craft for humanity as the Zarkonian Armada approached. It is later considered a transitional model to the full Asp-class Terran fleet fighters, which had longer range and beam weapons. 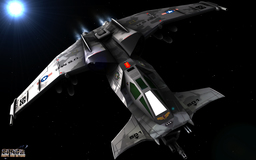